It was Scotland’s wettest summer in decades, but 75 years ago one Glasgow park attracted more than 12 million people through its gates.

Crowds flocked to the city for the 1938 British Empire Exhibition.

Opened by King George VI in May 1938, the event was intended to demonstrate the cooperation of Britain’s territories – as a symbol of the strength and unity of the Empire.

Bellahouston Park in Glasgow was transformed into a theme park of grand avenues, magnificent pavilions, fountains and fairground rides.

But as delighted visitors revelled in the glory of Britain’s achievements, behind the scenes the Empire was crumbling. With war on the horizon, Scotland would be presenting the final showcase of the British Empire. 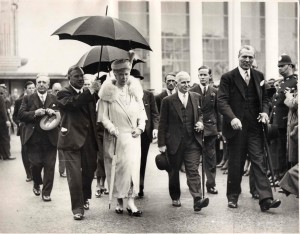 Peaceful intentions any one who was any one turned up including Royalty, Her Royal Highness Queen Mary “It was a source of intense pride for Scotland”, says historian Neil Baxter, Secretary of the Royal Incorporation of Architects in Scotland. “People loved it and came to visit from all over Britain.

“The exhibition was full-on propaganda about Britain’s strength. The programmes and exhibition material emphasised the Empire’s peaceful aspirations.

“They were not conscious of the irony that it was the swansong of the Empire.”

The colonial period saw many exhibitions across the world. Britain’s influence stretched from Canada to Africa, to India, Australia and New Zealand. It covered a quarter of the world’s population.

During the Victorian era, when the Empire was at its height, Glasgow’s population ballooned from 250,000 to 750,000 people. By the end of the 19th century the city ranked among the richest in Europe.

Glasgow was valued for its shipbuilding, locomotive construction and other heavy engineering industries. Its manufacturing was in demand across the world. Glasgow earned its reputation as the second city of the Empire.

But Glasgow’s prosperity mirrored the Empire’s own strength. When Britain’s finances and military power were depleted after World War I, the city suffered severely in the industrial depression.

“Glasgow chose itself for the exhibition,” adds Baxter. “Its earlier exhibitions had made a profit, and the city had the base of skill and manpower to build it in time.

“Because of the downturn in shipbuilding there was a large number of people, used to riveting sheets of metal together, who could handle the work. Up to 10,000 people were employed in the construction.

“They built the equivalent of a small town in less than a year. It was incredible. You can’t do that now. It would take longer just to get permissions in place.” 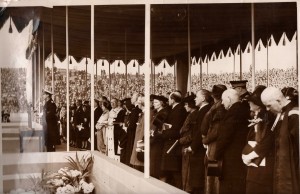 King George VI made his speech at nearby Ibrox football park on 3 May.

He described the exhibition as an “empire undertaking” and a “symbol of the vitality and initiative upon which the continual prosperity of Scotland must rest”.

His words would also pre-empt the Empire’s future, as he spoke of “willing cooperation” being the “hallmark of the commonwealth nations.

Up to 20 million visitors were expected between May and October, although the rain helped lower this to 12.5 million. Admission cost one shilling. Nearly 900 people were employed throughout the summer.

The Tower of the Empire, nicknamed the Tait Tower, was the spectacular centrepiece of the architect’s plans. Two lifts carried passengers up 300ft (90m) for views over the city rooftops.

The main water feature was a 400ft lake running along the main promenade. Its fountains shot water 100ft in the air, illuminated by floodlights of changing colours.

There was a distinct Scottish flavour to this ‘British’ event. The Clachan highland village was built from plaster moulds of real houses. It included a clan chief’s castle, smithy and weaver’s cottage.