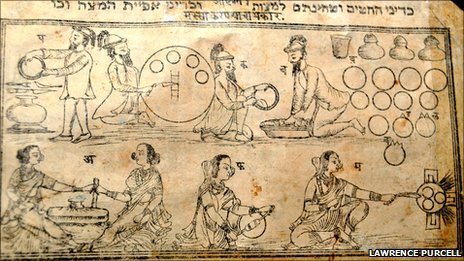 Dr Wise said the Haggadah gives an insight into the community’s life.

A rare Jewish text, published for the “Black Jews of India” in the 19th Century, has been discovered in a garage sale in Salford.

The 137-year-old Poona Haggadah, used by the Bene Israel community at Passover, was found by University of Manchester historian, Dr Yaakov Wise.

He said he paid a “substantial” fee after recognising it at the sale.

“I knew it was a very rare book – in fact, it may be the only copy of it in Britain,” he said.
Continue reading the main story >

The Prestwich-based historian said he was a regular at second-hand book sales as far away as Hay-on-Wye in Powys.

He said he had come across the Haggadah, which features text in both Hebrew and Marathi, an Indian language, in a pile of books at a local sale in Salford’s Higher Broughton area.

“A man had passed away and his family were selling his library,” he said.

“There were hundreds and hundreds of books for sale, but as soon as I saw it, I knew what it was.”

Dr Wise said he recognised it because he had given a lecture on the book’s original audience, the Bene Israel, in Liverpool a few years before.

The Bene Israel are known as “the Black Jews of India” because of their Indian appearance, as opposed to the “White Jews of India”, who he said were of Middle Eastern descent and had settled in the country much later.

The historian said he believed that the book had come to England during the post-colonial turmoil in India, when many Jews, who had British passports because of their work with the Imperial government, moved to the safety of London.

He said the book then probably came to Salford “by sale or inheritance”. 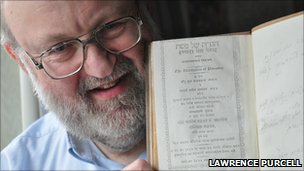 Dr Wise said the book may be unique in England
“The format and illustrations give an insight into the Black Jews,” he added.

“The illustrations, in particular, are fascinating, as the major Biblical figures, such as Moses and Abraham, look Western, while the people celebrating Passover are very Indian.”

He said he had yet to check with the British Library in London and Oxford’s Bodleian Library as to whether the book was unique in Britain, but that it was certainly a very rare text.

“There are very few books that have translations from Hebrew into any Indian language.