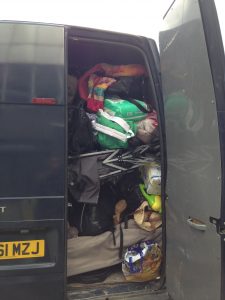 If it sounds to cheap then its getting dumped

It seems strange that Glasgow with its huge recycling facilities, well organised council waste collections and people who are keen to recycle and avoid landfill, that we are talking about fly-tipping as a growing problem.

We all have what is known as a ‘duty of care’, which means we are legally responsible for the waste that we produce. It’s quite simple to avoid breaching this duty of care, all you have to do is separate your recyclables and put your bins out each week. If you have any broken white goods, like fridges, take them to a local dump or call a HV Property Clearance to have them collected. Simply leaving them out on the pavement somewhere IS illegal. In Scotland, more than half of fly-tipped waste comes from households, and usually includes leftover DIY materials, carpets, mattresses, black sacks of waste and broken electronics.

It has been suggested that one reason fly-tipping occurs is due to the quick accumulation of waste, with not enough domestic bin space to get rid of the rubbish on the next collection, which could be two or three weeks apart. With more rubbish than bin space, it becomes a quick fix to simply bag up the waste and go dump it somewhere, but it’s the wrong thing to do, both morally and legally. In 2014/15, the government released figures stating there had been around 900,000 reports of fly-tipping in England alone. Around a third of illegal dumps are said to be around the size of a small van load, and another third are estimated to be the size of a small car boot.

Private waste clearances are an inexpensive and ethical alternative to fly-tipping, and are much simpler to complete that organising a bulky waste clearance with your local council. In fact, house clearances offer a positive contribution, especially when you work with an environmentally friendly service like Just Clear. We have spent decades working to find recycling and reuse routes for all types of waste, and now nothing goes to landfill! Equally, nothing goes to fields, alleyways, bridleways and roadsides; all of the waste we handle is sorted, organised and sent away for recycling.

Working with a licensed clearance company like Just Clear is much more important than you think. Whilst working with a unlicensed ‘man and van’ operation may seem like a good, cost-effective idea, the government have sent out many warnings alerting people to the danger of ‘cowboy clearers’, who operate outside of the law. With the costs of using landfills being quite expensive, these illegal outfits often pose as house clearers and then dump the waste in the middle of nowhere so they can make a greater profit on the job. With landfills costing upwards of £100 per tonne to use, it’s no wonder.

the meantime, professional waste clearance companies like HV Property Clearance are incredibly busy ethically handling waste, as it’s only a small portion of people who choose to illegally dump. Despite the 900,000 figure, there are millions of people who work with waste clearance companies multiple times each year to do things properly, and to avoid jumping through all the hoops and over all the hurdles that councils put in their way. At the end of the day, is it worth risking being caught, or is it better to do things properly, with a team of professionals who adhere to a strict zero-to-landfill policy.